Last night after my bath, I was sitting outside cooling down when a couple of helicopters flew overhead. They were no doubt flying at some legal altitude, but in the prairie darkness, they seemed very low. Their choppy rumble shook the house and the deck. Even the concrete and the moon seemed to tremble a little.

I knew that what I was hearing was Golden Coyote in action. Every year, South Dakota’s National Guard hosts one of the largest and longest-running military exercises in the nation. The two-week exercise is held in the Black Hills National Forest and Custer State Park, and provides both reserve and active-duty military unites with training opportunities relevant to overseas “contingency” operations and homeland support missions.

In other words, everyone participating is training for the possibility that they might have to defend the United States on our own soil. Commanders focus their units on “warrior tasks and battle drills” that would be necessary in wartime. As a component of the U.S. Armed Forces, these people represent every state, the District of Columbia and the territories of Guam and the Virgin Islands.

This is the 35th year of the Golden Coyote exercises, and more than 4,000 service members, both male and female of course, from 92 units representing 27 states and four foreign nations are participating.

Steaming and wearing only a bathrobe, I sat in my padded chair under the deck and looked up as the great dark birds swept overhead. Those men and women were practicing to defend my right to relax in my back yard, the rights of my neighbors to watch TV and complain about the racket, and the right of the drivers on the highway to blissfully speed along listening to the radio, unaware of the glory of the full moon or the importance of those helicopters.

The soldiers are participating in warrior training tasks and battle drills such as combat patrols, urban combat operations and land navigation. They are learning how to evacuate casualties and operate convoys, skills they would need if they were dropped into an unfamiliar country.

Besides learning how to combat enemy action, the soldiers spending two weeks in the Black Hills work on various humanitarian missions, including designing and implementing projects to improve the forest, and the infrastructure of some many local communities. For example, some units are cutting timber from burned-over areas of the woods and transporting it to the local Lakota reservations to use as firewood. Others are building and upgrading existing structure in the park, resurfacing local roadways, or working to remove hazards in the wilderness areas.

Every day since they arrived, we have watched the jeeps and trucks of the Golden Coyote rumble up and down Highway 79 as they attend to their tasks. Despite being an Air Force widow, I’ve never learned to salute properly. But in my heart, I salute the men and women of Golden Coyote, and their respective units, every day.

For those of you hoping to read about coyotes– the indispensable vermin-predators that also clean up dead animals, and are sometimes called the song-dog of the grasslands– I offer my apologies and this photo, taken by a game camera on a friend’s property a few miles from my ranch, where coyotes are welcomed. 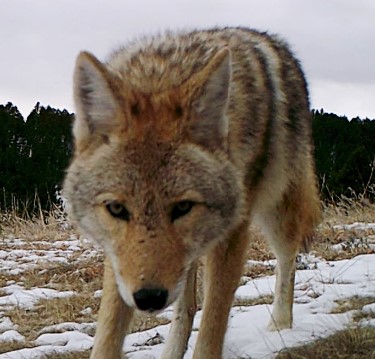