How to Cuss in Western (and other missives from the high desert).
Michael P. Branch. (Boulder: Roost Books, 2018) 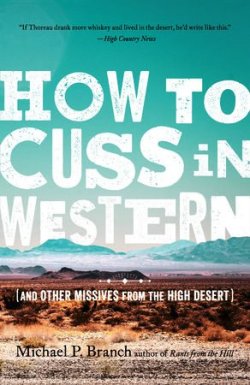 Because I have always—well, since I was four years old—loved and respected my local library, I do not write in books unless I own them, and intend to keep them.

Therefore, when I own a book, the page on which I begin to underline or scribble comments becomes a gauge to my evaluation and respect.

I started underlining in How to Cuss in Western on page 2, where Michael P. Branch explained the system of “restrained communication” embodied by the way Westerners wave.

“You lift only your pointer finger off the wheel for a routine ‘howdy’ to a neighbor,” he notes. “. . . Under no circumstances do you ever allow your palm to leave the wheel, which would be a greeting so effusive and emotional—so perfectly hysterical—that anyone foolish enough to display such loss of self-control would never regain the respect of their neighbors.”

Laughing, I recalled that today I received a full-hand wave from a female resident of the neighborhood who is practically giddy with her desire to be my buddy. Yet in several years of residence here she has not grasped this simple rule, one of the most basic principles of country acceptance. By the time children learn to drive here—at age ten or so—they all know enough to keep their hands on the wheel while greeting friends. If one is truly enthusiastic about the friendship, one might nod an inch or two while raising the trigger finger, but that’s all that’s acceptable.

“Oh, you’re so lucky to live in the country,” coo some of the folks who read my books or know I’m a rancher.

And some of these folks buy little plots of land from my ranch neighbors whose kids have gone off to college and now live somewhere else, so the rancher is retiring and moving to town.

Some of these folks who move to the country build a monster mansion on top of a hill where they can see from the Black Hills to the Badlands. They may not realize how well the rest of us can see them. They get a couple of SUVs, and erect a shed to shelter the horse, or the goats, or a cow or two. Their dogs come to visit me and to chase the calves in my corral until I can draw a bead on them. Rather than ranting, I’d like to mention these things politely in the local store or church or Bingo parlor but that doesn’t work because they shop and worship in the larger town to the north.

So instead of ranting, maybe I’ll hand out copies of this book with a bookmark at “Shit Happens,” one of my favorite essays. Folks used to living in town are also used to systems that whisk their personal wastes away without much fuss. If you live in the country, you soon learn there is no away for any of your discarded trash.  Living in the country means someone in the family must be the Fecal Sludge Manager, and study Septic Tank 101, a lesson in rural living rarely mentioned in real estate brochures or ballads.

Profanity? Here are Branch’s comments on the dwindling ability of Americans to cuss effectively and colorfully: “If we cannot communicate through the use of profanity, I wondered, what the hell is left? Have we been reduced to sonnets and tweets?”

One essay, “Such Sweet Sorrow,” centers on a topic tackled by such writers as Aristophanes, Dante, Shakespeare, Twain, Joyce and Edward Abbey, a topic Branch suggests was first written about in 1900 B.C., and which still challenges writers. Branch’s approach is a writer’s challenge; The Urban Dictionary lists 261 synonyms for this topic, and Branch attempts to use all of them, from “breeches burners” to “wee fluffy.”

These aren’t perfect essays, in part because Mr. Branch is a real working writer; he writes to deadlines, so he doesn’t have the luxury enjoyed by some writers of tinkering with a piece until it satisfies every editorial quibble. He meets a deadline, and then goes back to cutting cords of wood to keep his family warm, teaching, helping raise his children, and walking a thousand miles a year; clearly he uses some of that time to think.

Besides humor, Branch provides information about a wide array of fascinating country topics, from the extinct American cheetah, to the reason ranchers’ fences are hazardous not only to pronghorn but to hawks and owls—a fact that was new to me. In one quick sentence, for example, he sums up the Bureau of Land Management’s horse problem in Nevada: “We do not have too many horses; we have too few lions.” He understands that the prairie as it should be is a wild place, despite the domestic animals and people who dwell here, and to be healthy, it must remain so.

As a graduate of the College of Fecal Sludge Management, I highly recommend that anyone contemplating a move to the country read this book.

Now excuse me; I have to go find another one of his books.

At the website http://michaelbranchwriter.com/ you will find information about the author and his books, his upcoming public appearances, links to essays (some of which are chapters in his books), and a note about how to get podcasts of his essays which appeared in High Country News.

4 thoughts on “Book Remarks: How to Cuss in Western”