The 2018 South Dakota Festival of Books will be held September 20 in Sioux Falls, and September 21-23 in Brookings.

I’m not able to go this year, but if I were going, I’d look for these presenters first.

I’d hope to speak to Lee Ann Roripaugh as she ends her four-year term as our poet laureate. A new laureate will be inaugurated at the 2019 Festival of Books in Deadwood. The SD Poetry Society invites anyone who would like to be considered for the position to submit a letter of application and resume between Nov. and Dec. 1, 2018. For complete details, visit the SDSPS website at www.sdstatepoetrysociety.com. 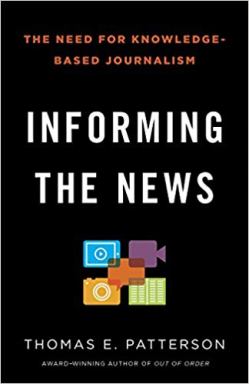 Maybe I’d get a chance to listen to Thomas Patterson, whose Informing the News: The Need for Knowledge-Based Journalism was the 2018 One Book South Dakota. The book is on my “to buy” list, because I agree with him that we need to return to a solid base of information in journalism, rather than following the despicable trend to “infotainment” that is warping citizens’ judgments. Newsrooms are shrinking at newspapers and broadcast station alike, which means fewer journalists are out digging for the truth. The speed at which information is conveyed has also increased; speed is the enemy of accurate news from varied objective sources.

I thought I would only skim Caroline Fraser’s monumental Prairie Fires: The American Dreams of Laura Ingalls Wilder, but instead I ended up reading carefully, and my admiration for the writer is immense. Rarely have I read a book with more footnotes, which means that when Fraser makes a statement, it’s likely not just her opinion but the result of careful research and deep digging into the life of this famous writer. Like many South Dakotans, I grew up with Laura’s stories, and while I’m somewhat surprised to know that she wasn’t being entirely truthful, I’m delighted to learn the truth behind her tales now.

I’d definitely make it a point to exchange a few words with Elizabeth Cook-Lynn, one of South Dakota’s most astute thinkers and a dynamic voice for the citizens with whom she most identifies: the Lakota. Though English is not Elizabeth’s first language, she is more articulate in it than most of us. And I’m behind on reading her work; I haven’t yet gotten In Defense of Loose Translations: An Indian Life in an Academic World. I will hope to remedy that lack soon, and I know I’ll learn something.

Because I won’t make it to Brookings for the Festival of Books, rather than speak with these writers, I will join them on the printed page.

You will find the schedule of events, a list of presenters, a map of Brookings with the venues marked, and more on the South Dakota Humanities website.

If I were going to the Festival of Books I would have a hard time deciding which books to buy, what other events I would attend, and which presenters I would try to talk with– in addition to the four listed above.